Yassi Pressman bares the ‘wins’ and ‘losses’ in her life

Pressman hosts the game show “Rolling In It Philippines”

Actress Yassi Pressman, who recently took on the challenge of being the host of the local version of the game show “Rolling In It,” said that what she considered her “biggest loss” was attempting to quit show biz at 17.

At the recent launch of the second season of “Rolling In It Philippines” on TV5, Yassi was asked—in relation to the show’s mechanics—to recall the moments in her life that she regarded as “wins” and “losses.”

To this, the host replied: “I guess my biggest loss would be the time I decided to quit show biz when I was 17. It was when I said I no longer wanted to be a part of it because I already felt so tired of it. My biggest win, however, was being able to give a long life to my father with the help of this industry. We were only given six months to spend with him, but he lasted for almost 10 years after that.”

Yassi’s dad, Ronnie Pressman, a British national, passed away in February 2020. He was 90.

As to winning what she considered a “jackpot” in her life, Yassi said: “To this day, I still say that becoming part of ‘FPJ’s Ang Probinsyano’ for five years really changed my life. I will keep on saying again and again how thankful I am to them for trusting me. That really changed the quality of life I was able to give to my family.”

She was also asked why she decided to shift to hosting, and whether or not her long stint in “Ang Probinsyano” made her feel too tired and bored with acting. “The offer to become a host came as a surprise. It was my Viva family that presented it to me. Initially, I said I don’t think I would be able to do it. I felt very uncertain, but I still gave it a try. I’m still here and we’ll be having our second season. I hope this means I did a great job and I helped make the program enjoyable for both the contestants and the audience,” she began.

“Also, I didn’t feel bored and tired of acting. In fact, I was still able to do a movie, titled ‘More Than Blue,” which is still topping the most-viewed list on Netflix. I wanted to try something different and explore more—that’s my goal at the moment,” Yassi declared. 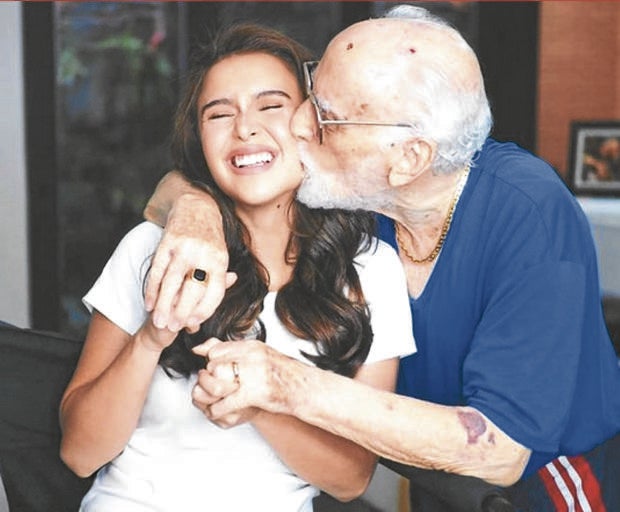 Yassi Pressman (left) with dad, Ronnie, who passed away in 2020.

The 27-year-old has also gotten involved in several business ventures. This was why, she said, she found it difficult to commit to doing projects that would require her to stay inside a taping bubble for a long period of time. Yassi is currently involved in pet care services, mental health support, oral care and wellness, and in a play-to-earn mobile gaming app.

The second season of “Rolling In It Philippines” started airing on TV 5 on May 25. Yassi said whatever she learned from doing Season 1, she tried to incorporate into the new season. “You have to always give your 150 percent when hosting, especially if you’re doing it alone and don’t have a co-host. That was one of the reasons I felt really nervous in the beginning. Another thing I’ve learned was to be more open to converse with the participants and to really listen to what they’re saying,” she pointed out. “I was still feeling a bit shy during the first season. It helped that there were a lot of comedians who got invited to appear in Season 2. I felt inspired by them so I was all-out.”

Her own worst critic

In spite of this, Yassi said she was her own worst critic. “I tend to be a perfectionist, sometimes. I would watch the show to see how I performed. I noticed that last season, I would speak so fast. Luckily, my director was there to guide me and give me advice,” she said. “If ever I received comments, I would take them constructively. That’s how you learn—accept that you’re not always the best. You have to be open to learning new things every time.”

Yassi also said she was pleased to have had the chance to give suggestions on how to improve the show. “A lot of my wishes for the show were granted. We launched it with Nadine [Lustre] as one of the guests. She hasn’t been on TV for four or five years. I was surprised that she said ‘yes.’ (YouTube celebrity) Zeinab [Harake] came on board, too. We also have Diego Loyzaga, Marco Gumabao, and a lot of big names in the gaming industry, as well as several Tiktok superstars. I will stop at that so as not to spoil everything for the audience. It was really nice to have them on the show.”

Catch “Rolling In It Philippines” Season 2 every Saturday, 7:30 p.m. on TV5. Catchup episodes are available on Cignal TV CH 3 and SatLite CH 30. It can also be watched Live and On-demand via the Cignal Play App.

Why Exercise Is More Important Than Ever For Seniors – Credihealth Blog

How can you keep your mind active during quarantine? Here’s expert advises – Credihealth Blog