Ripley smashed Morgan into the ring post, leaving Morgan in pain. Meanwhile, AJ Styles and Damian Priest joined the ringside. The match continues with Rhea Ripley’s domination. However, Liv Morgan delivered a crossbody on the sidelines. Eventually, Morgan pinned Rhea Ripley with a roll-up pin when Rhea tried to steal the victory with Damian Priest’s aid.

Riddle and Shinsuke Nakamura Defeat The Usos- We are underway with our Unified Tag team Championship Contenders match. Nakamura connected with a knee after knee, punishing Jey Uso.

The Uso’s are back in control on WWE Raw. The Brothers cornered Riddle and kept him away from Nakamura. Jimmy Uso is now being dominated by the Japanese superstar. Nakamura looks for the Kinshasa, and Jey makes the save. Jey gets tagged in by Jimmy who then delivers the big splash. Jey pins Nakamura only for Riddle to save the match.

Theory Defeats Mustafa Ali: After the assault, Theory granted Mustafa Ali his title match for the United States title. Theory started the match with a big blow to Ali and later smashed him into the middle turnbuckle. However, Ali fought back and stood strong to fight. But in the end, Theory defeated Ali after a rope fall.

On the other hand, WWE official Adam Pearce appeared to announce a United States Title rematch at Hell in a Cell. Initially, he mentioned Vince McMahon made the match official for a fair point.

Theory Attacks Mustafa Ali: On the recent episode of Monday Night Raw, Mustafa Ali and Ciampa competed in a one-on-one match. Mustafa Ali competed in a contender’s match for the United States Champion. Ciampa gave a dominating start to the match with his consecutive strikes. However, Ali made his momentum back in the match and countered Ciampa.

Certainly, Ali tossed Ciampa on the sidelines and delivered a suicide dive. The match was taking an interesting turn towards Ali when the United States Champion Theory attacked Mustafa Ali causing a disqualification win for Ali. Later, Theory smashed Mustafa Ali into the ring post and gave him his title opportunity right there.

Alexa Bliss defeats Doudrop: On the recent episode of Monday Night Raw, Alexa Bliss went one-on-one against Doudrop. The match started with Doudrop’s domination and she utterly dominated Bliss. However, Bliss made her comeback and countered Doudrop’s attack. Eventually, she pinned Doudrop after a twisted Bliss.

Surprisingly, Seth Rollins showed up in the audience and mocked Cody Rhodes. Eventually, The Revolutionary insulted Rhodes’ legacy and expressed his hatred toward the American Nightmare. On the other side, Cody was silent and had enough of the insult. Eventually, he got angry and called Seth Rollins in the ring to fight but Rollins denied it. 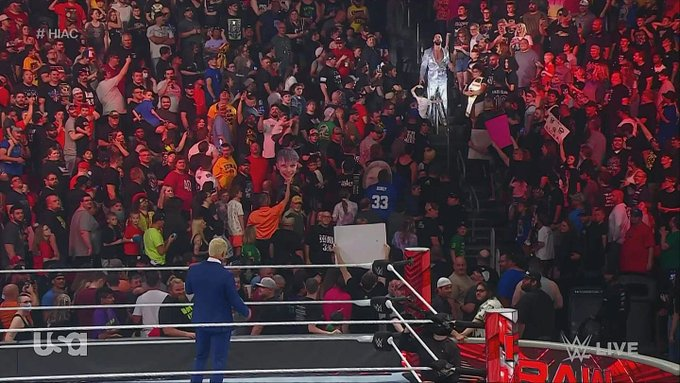 Enraged Cody Rhodes went into the audience and attacked Seth Rollins. Both men exchanged heavy blows. Further, WWE Officials arrived to separate the two men. However, the brawl was beyond stopping.

Although both men were held by the WWE Officials, they broke through and attacked each other once again. In the end, WWE Official separated both superstars and stopped the brawl.

6-man tag team match: On the recent episode of Monday Night Raw, Ezekiel joined forces with Rey Mysterio and his son Dominik to take on Alpha Academy and Kevin Owens. The match started with a strong start from the Alpha Academy. Gable took the control of the match followed by powerhouse Otis’.

Get up on your feet. Put your hands together.#WWERaw pic.twitter.com/FygxdGKq27

However, the opposition countered and dropped Otis on the sidelines. Further, Kevin Owens entered the match dominating the Dominik Mysterio. Kevin switches the tag to Otis. Soon, tags switched on both sides and Ezekiel attacks Chad Gable and Kevin Owens. The match picks pace as Mysterios involve themselves and clear the opposition from the ring.

Although Owens fought back, he failed to grab the win for the match. The Mysterios played a key role in the match by taking on Otis off the match. In the end, Ezekiel pinned Chad Gable to grab the victory.

On the contrary, the loss made Kevin Owens crazy. Eventually, he unleashed his frustration, destroying the commentary desk.

Bianca Belair defeats Asuka: After the brawl, Bianca Belair and Asuka competed in a one-on-one match. Also, Becky Lynch joined the commentary desk to watch the match. The Raw Women’s Champion gave a great start to the match, showing her athleticism. Although she had sheer strength, Asuka countered her and tried to overpower her. Both women showed their potential to beat each other, but the match lay on no one’s side. 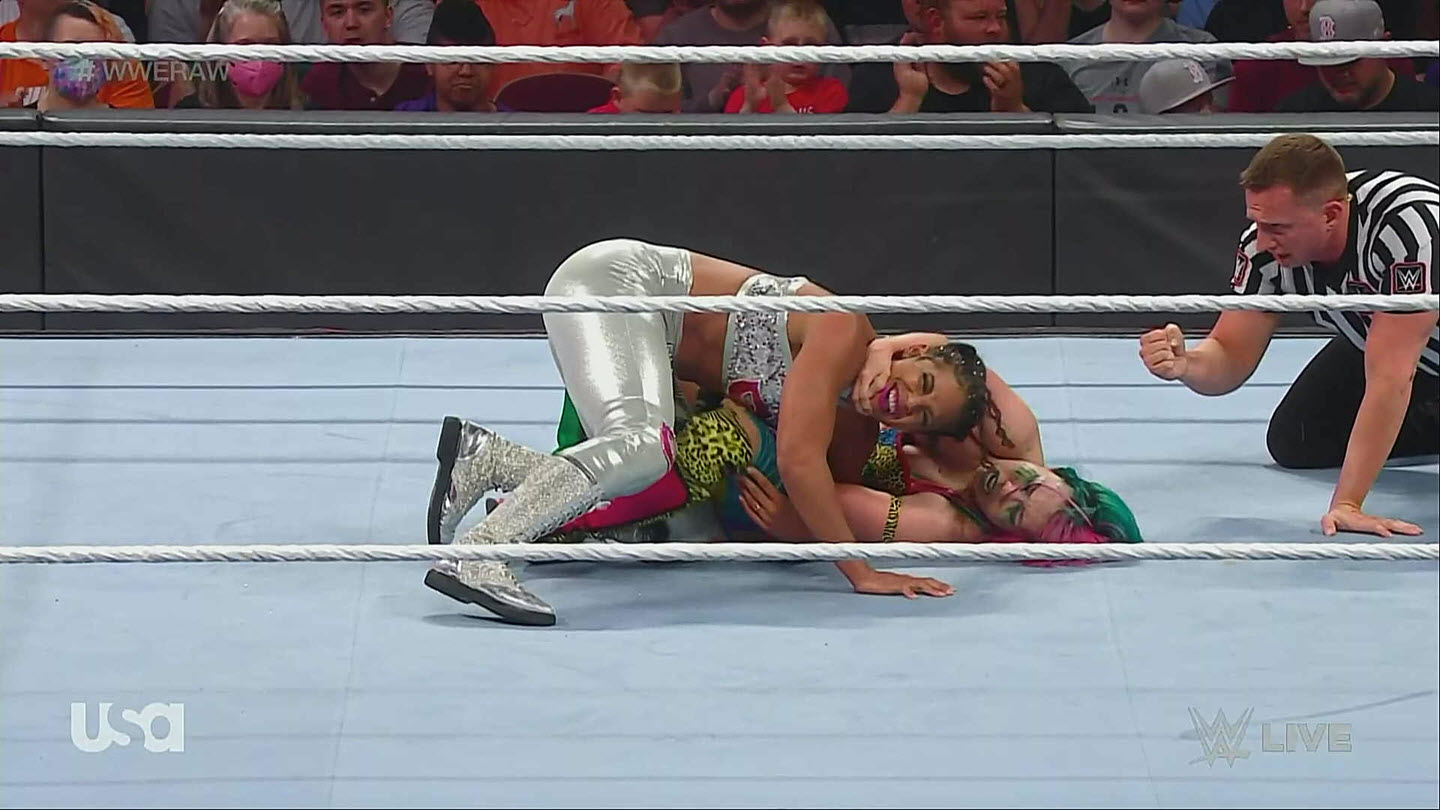 Later, Asuka tried to hold Bianca Belair in a lock and both women fall off the top rope on the ringside. The match continued, with both women attacking each other furiously. Asuka delivered a kick followed by a hip attack on the champion. Further, Asuka delivered a dropkick from the top turnbuckle and covered Belair for the pin.

However, the champion kicked out. The match progressed with Asuka’s domination of Bianca Belair. Soon, Asuka tried to end the match and caught Belair in the Asuka lock, but the champion countered it with a face first. Belair tried to capitalize, however, Asuka caught her in the Asuka lock once again. As Asuka caught Belair in the submission hold, Belair shifted her momentum backward and pinned Asuka to win the match.

Later, Becky Lynch unleashed a sneak attack on Belair and Asuka. She delivered a back suplex to Asuka and ended with a manhandle slam to the Raw Women’s Champion. 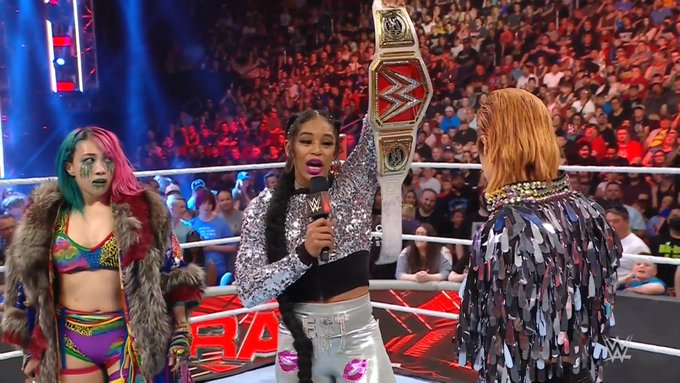 But Bianca Belair showed up to acknowledge both challengers that she will not lose her title at Hell in a Cell. In addition, she warned Big Time Becks to beat her down. Nevertheless, this wasn’t taken well by the former Raw Women’s Champion and she delivered a cheap shot to Bianca Belair, and a brawl began in the ring between all three women. Eventually, Becky tried to beat both women but ended up being knocked out by Belair and Asuka.

Where will WWE Raw take place?

When will WWE Raw get started? Date.

When will WWE Raw get started? Time.

The live streaming of WWE Raw takes place on the USA Network for the fans in the United States and WWE Network for the fans elsewhere. The Indian viewers can enjoy WWE Raw LIVE on the Sony Sports Network channels. The viewers can tune into Sony Ten 1/HD for English, Sony Ten 3/HD for Hindi, and Sony Ten/4HD for Tamil & Telugu commentary. Web users can log in to www.sonyliv.com.

How It Impacts Your Health – Credihealth Blog