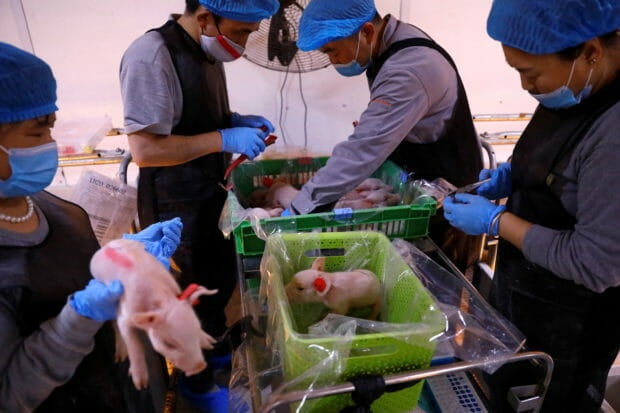 CHIFENG, China — Tiny slivers of ear tissue snipped from hours-old piglets offer valuable clues for the team at Best Genetics Group (BGG) as it strives to improve the genetics of China’s hog herd to produce cheaper meat for the world’s top pork consumer.

BGG is among about 100 farms enrolled in just such a state-led endeavour to wean China off imported stock and breed a self-sustaining herd to feed its 1.4 billion people.

China has the world’s biggest hog herd, but relies heavily on imports for breeding material, more so after the African swine fever virus in 2018-19 decimated its pig population and wiped out much of its breeding pool.

“We must insist on our own independent breeding,” Hao Wenjie, BGG’s head breeder, told Reuters at one of its farms that lies about 30 km (18.64 miles) outside the small city of Chifeng in northern China’s remote Inner Mongolia region.

“Only then can we provide high-quality seeds, or breeding stock, for our market and break this need for everyone to go to foreign varieties,” she added.

Breeders are looking to improve the genetics of overseas and local pigs, but lack of experience in collecting data, high costs, competition and market volatility pose big challenges.

These efforts come amid President Xi Jinping’s calls for self-sufficiency in food, with the focus recently turning to the genetics or the “chips” of agriculture, seen as a weak link in China’s food security.

Raising a pig in China costs about two-and-a-half times more than in the United States due to costly imported feed and high levels of disease.

Genetic improvements for cheaper meat are thus in high demand. But so far international companies have been better at this.

Rapid genetic progress requires rigorous data collection and analysis and not many managers in China have the experience to design and implement such collection.

“In a commercial farm, it doesn’t matter if you use two different boars during a sow’s heat. Here, it has to be same.”

Despite such hurdles, privately owned BGG, founded 10 years ago, is among those making progress.

After buying 1,200 purebred sows from Canada-based Genesus in 2012, it has expanded the herd to 6,000 and average number of piglets born per litter to 15, one more than when it began.

Now BGG aims to increase the litter size by another 1.35 in five years and reduce the backfat on its boars.

BGG collects hundreds of thousands of data annually on traits including litter size, loin depth, and daily weight gain. It selects the pigs with the highest values across such traits for breeding, improving performance with each generation.

Genomic selection is helping speed up the process.

For example, based on the DNA from the tissue of a piglet’s ear, BGG predicts how well a pig will perform, boosting the chances of selecting the best breeders.

“We have a goal of 3-5 years for improvement of each trait,” Hao said at the farm, where red-roofed buildings are perched on a hill, surrounded by scrubland and mountains.

Around 65 staff live there for weeks at a time, carrying out artificial insemination, gathering data on newborns and ensuring the herd is healthy.

Another company’s breeding farm has been asked by its management to cut back on genomic selection to lower costs, its head breeder said on condition of anonymity.

China has too many small breeding farms, said Fu Yan, professor of genetics at Zhejiang University. Big, listed hog producers who started breeding programmes in recent years may be best placed to invest the large sums needed to compete with international companies, he added.

On China’s push to improve the genetics of native pigs, some experts warn they are already so far behind that it detracts from efforts underway on imported breeds.

China’s Meishan pig is renowned for its large litters, but it and dozens others grow slowly and are too fatty.

“It takes about one year for the animal to grow to 100kg. We tried to create a local breed that can grow in 8-9 months but it’s not that consistent yet,” Mo said.

How do Multivitamins Help in the Growth of Hair and Nails? – Credihealth Blog